The Atlanta Travel Team season is in full swing as of last weekend, with the B team and All-stars both logging game number one in the books.  If you missed these games, you missed well timed hits, mind-boggling maneuvers and phenomenal team work.  If you were there and just want to relive the awesome few hours of last weekend, we’re here for you too!  Read on for the recap of the Rumble Bs taking on Team Tennessee and the Dirty South Derby Girls playing their rematch game against Jacksonville’s New Jax City Rollers. 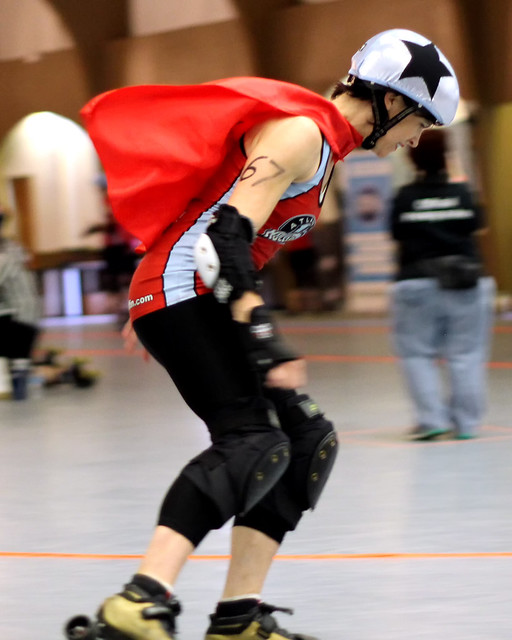 The Rumble Bs took the track against the all-stars of Team Tennessee to start an amazing night of roller derby in Atlanta.  Tennessee drew first blood, running up an 18-4 lead before the Bs could take back control.  Switching team jammer penalties brought us to a tied game and it wasn’t until only 16 minutes remained in the first half that the Rumble Bs were able to take their first lead change.  The next few minutes proved to be intense as ties and lead changes dotted the second quarter.  A phenomenal last minute jam from High Jinxxx started to separate the two teams and the Bs left for halftime ahead, 107-59.
The two teams continued to battle it out for the first few minutes of the second half, before penalties and apex jumps started to turn the tide and close the gap for Team Tennessee.  There were several lead changes until the final four minutes when Atlanta finally pulled ahead, from being four points behind to five points in the lead. Atlanta continued to gain lead jammer and put points on the board for the final breathtaking minutes of the game, finishing at 210-168 Atlanta. 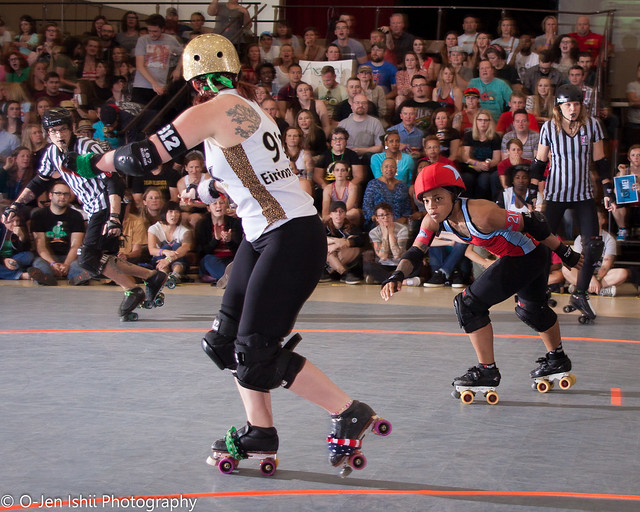 The second game of the ARG March Double Header was full of hard hits and swift scoring runs. Jacksonville put the first points on the board and were able to maintain their lead with a steady consistency. A few Atlanta jammer penalties allowed Jacksonville’s fast moving and decisive offense to develop a comfortable lead against Atlanta’s defensive formations. Atlanta fought back with ferocity, gaining three and four points at a time, but were unable to gain the substantial scoring runs they needed to close the gap. Atlanta’s defense held Jacksonville’s jammer for a large point run for Atlanta near the end of the first half, but the half still ended at 42-119 Jacksonville.

The second half seemed to follow suit, Atlanta put up a tough game both defensively and offensively, but ultimately were unable to gain sufficient momentum, which limited their ability to play catch-up against the quick 4 and 5 points Jacksonville were putting on the board at a time. Jacksonville remained in control of the game, which ended 213-91 Jacksonville.